Poole Printmakers are a membership-led co-operative of artists, both experienced and those learning their craft, supported by its own committee. We have use of a space dedicated to getting on with art, with open-access use available to members.

Skills can be introduced through a series of courses in print techniques. 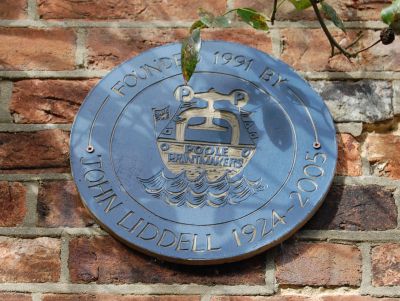 An 18th Century cart shed with medieval work in the foundations, the building at 5 Bowling Green Alley has been through many uses and transformations. In the late 1980s it was sensitively converted for use as a studio and workshop.

Poole Printmakers was founded in 1991 by John Liddell, a well known printmaker/teacher, and a group of enthusiastic local printmakers.

The co-operative provides a workshop and forum for print makers in the Wessex area whose work is shown regularly in local gallery venues.

The workshop also hosts programmes for those with special needs as well as open sessions for members and non-members.

- extracts from the archives : a first-hand account by founder member Jenny Surridge

The Building at 5 Bowling Green Alley - I attended John Liddell’s relief printmaking classes in 1980 at Shelley Park, Boscombe. It was an exciting springboard and a creative release from my academic painting career. While telling my brother about my experiences, he reminded me that John Liddell was his art master at Reading School between 1948 and 1955. I had a wonderful conversation with John about those days in Reading. I told him I was considering retiring from my job as Exhibitions Co-ordinator at (the then) Poole Arts Centre and giving up teaching at the college. I decided that a space away from home was essential to allow me to make larger experimental work, and have the time to do it.

In the summer of 1988, I saw a semi-derelict unoccupied building in old Poole alongside a season-ticket car park...both of these facilities would be ideal.

After several enquiries, I located the owner of the building. He had been restoring old cars in the ground floor and had let the top floor to a house clearance company called ‘Woody Worms Warehouse’. The tenant had disappeared leaving pieces of furniture and lots of rubbish. I chatted to John about it - he wanted to see it, as he loved old cars! The cars were standing on scraps of carpet on a mud floor. In the roof were sheets of plastic and tarpaulins to keep the rain out. The yard was a thoroughfare for the residents of the flats above the High Street shops - many of these were allocated by social services as half-way housing for the young homeless.

After lengthy negotiations with the owner and bank, I purchased the leasehold building in September 1988 from Roger Lees. The deeds went back to 1716 but as the freehold owner could not be traced, I purchased the freehold. I had to ensure that no-one except myself could enter the yard. In order to do this, I purchased a seperate right of way for the flats and build another wall, blocking off the original access.

My next difficulty was finding a builder to take on such sensitive renovations...most said “Knock it down and start again”! I was finally relieved to meet Andrew Hope, an artist living nearby in Market Close. He had spent several years working with his father restoring old buildings and so I felt confident. But it took a great deal of time as he did not always turn up! I paid him as each job was completed:

- realigning both gable ends
- adding extra timbers to support the roof
- new windows throughout
- reinforcing the mud floor with steel, concrete and plastic sheeting
- underpinning the wall onto the yard...the other three were laid on stone foundations (probably an old barn or cart shed)
- replacing roof tiles and insulating inside (the walls were only one brick thick)
- relaying yard stones and ‘acquiring’ some from the inner yard
- installing mains drainage, lavatory and basins
- rewiring all electrics
- installing gas central heating with boiler

While excavating,  we uncovered a a 3ft ‘well’ of medieval origin from which a brick-lined tunnel led to the yard. This was filled in and is situated under the stairway...a possible smugglers entrance? We kept many pottery shards and artifacts found in the mud floor, and Ruth Oaks now has many of these as well as an (Edwardian?) wooden board from a cart. Carpet Factor - this was on a beam upstairs, as well as several horseshoes. There was evidence that the space had been used for glassblowing, as a carpet warehouse and as a builders’ merchant.

After completion of the ground floor I was anxious to find a tenant to cover my costs and pay for the installation of gas central heating, water and telephone. Andrew Hope suggested I might approach Ashly Cross school to purchase cupboards, worktops and tables, etc from the demolition company. I was amazed to find all the science laboratory cupboards and worktops still there as well as one of the needlework tables. They were ideal and Andrew fitted them to complete the ground floor. It was an exciting moment.

The top floor was finished in about September 1990 and I moved in. The ground floor tenant decided at the end of the year not to renew the lease. In 2006 after two new hips, a mountain of paperwork regarding 5 Bowling Green Alley, annual tax returns, renewing leases plus constant building and decorating work needed, I decided to sell the studio to fellow member, Ruth Oaks.